Genetic testing for pregnant women at a glance

Comprehensive pregnancy care at CU OB-GYN
Do you have questions about genetic disorders or pregnancy? Let’s set up a time to discuss them.
Request Appointment

What is prenatal genetic testing?

Genetic, or inherited, anomalies can be passed from either mother or father to a fetus at the time of conception. One in 200 pregnancies involve genetic disorders and the likelihood that the pregnancy will result in a genetic disorder increases as women age. Genetic testing can help patients to identify potentially catastrophic abnormalities such as trisomy 13 or 18, and to inform them of life-changing genetic abnormalities like cystic fibrosis and Down syndrome.

Families can feel differently about genetic testing. At University of Colorado OB-GYN, we are here to help patients make the decision best for them and their family. Some women and couples want to know information about their baby to prepare themselves and their families. Others wish to know information and may choose not to continue the pregnancy based on the results.

Women who feel confident that genetic testing results would not change their mind about the pregnancy often choose to forgo all genetic testing. Choosing to do no testing is a perfectly valid option. 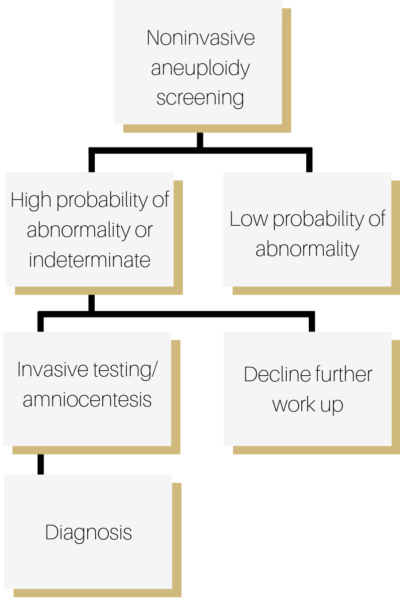 It is also possible for a chromosome to be absent from a pair, resulting in what is known as monosomy. One instance is the absence of a sex chromosome resulting in an X0 as opposed to the usual XX gene presentation. This is known as Turner syndrome.

While all women are at risk for having a chromosome abnormality, women over age 35 have a high chance of giving birth to a child with a chromosomal abnormality, such as trisomy 21.

Currently, no therapies or interventions exist to change the chromosomes of fetus’ with trisomy.

Patients interested in genetic testing and diagnosis have two procedural options: noninvasive and invasive. Doctors often begin with less invasive measures if an abnormality is suspected or identified during an ultrasound, starting with blood testing.

Noninvasive testing means that the pregnancy will not be harmed by the procedure. These tests are less accurate, but present no risk to the pregnancy. If testing returns with “low probability” of abnormality, then no further testing is recommended.

If the testing returns with “high probability” or an “indeterminate” result, then an invasive test may be recommended for definitive diagnosis. Invasive measures are those that could cause potential harm to the pregnancy such as amniocentesis, a procedure where a needle is placed through mom’s abdomen in order to extract fluid to be analyzed for genetic information.

Carrier screening means we test patients who are already pregnant or looking to conceive to see if they “carry” a genetic mutation. When both parents are healthy, we know they do not have a specific disease, like cystic fibrosis, but there could be some question as to whether they carry the disease. If both parents are “carriers” of a disease, they could each pass that abnormality to their children, resulting in children who have a hereditary disease.

How does carrier screening work?

Which genetic diseases can we test for?

Carrier screening is designed for “autosomal recessive” genes. This means both parents must have the abnormal gene for their child to be at risk. Examples of these genes include but are not limited to cystic fibrosis, sickle cell anemia, spinal muscular atrophy, and Tay-Sachs disease. Pregnancy care providers will often discuss and recommend tests that are most appropriate based on each partner’s ethnic background and health history.

Patients can opt to be screened for individual genes, or a panel (multiple genes). Keep in mind that the larger the panel, the higher the chance that a person will test positive for a mutation.

What to do after positive test results

If both partners test positive for a recessive gene, there is a 25% chance that the child will be affected with the disease. We recommend discussing the next steps with a genetic counselor, as the recommendations will vary based on the specific disease.

What about testing other genes like breast cancer (BRCA) or colon cancer (Lynch syndrome) genes?

These tests are reserved for patients with specific family history of breast or ovarian cancer. While the results may affect decisions around pregnancy, they are classified as “hereditary cancer genes,” not “prenatal genetic testing.” Patients interested in learning more should discuss their concerns with their provider.

How much does genetic testing cost?

Each insurance carrier has its own policy on prenatal genetic testing. We recommend patients call their insurance company to get an understanding of what is covered. The following codes and terms may be helpful to confirm coverage.