Pregnancy is an exciting time in a woman’s life, but it can also be a new experience and full of unknowns. As a large practice with many experienced OB-GYNs, we’ve fielded a lot of questions related to pregnancy. We’ve answered some of the most frequently asked questions in the list below.

Got pregnancy questions? Let’s set up a time to discuss them. Get in touch with us using our online form or give us a call.

Are there any dietary restrictions during pregnancy?

Diet during pregnancy should be focused on eating a variety of nutrient-rich foods that nourish the mother as well as the developing baby. This should include plenty of fresh fruits and vegetables, carbohydrates from grains and breads and protein from fish, meat or nonmeat sources, such as beans and legumes. Women should also take a prenatal vitamin before and throughout pregnancy to ensure that they are getting all of the nutrients their baby requires, including folic acid.

Pregnant women should avoid certain foods and beverages to reduce the risk of sickness, pregnancy complications and birth defects. These include:

Can I exercise while I’m pregnant?

Regular exercise during pregnancy is safe and can even be beneficial. It can reduce the risk of gestational diabetes and ease constipation and back pain. As a rule, a woman may continue her normal fitness routine while she is pregnant, though some adjustments may be advised. Pregnant women should check with their OB-GYN to make sure their exercise routine is safe.

Generally, low-impact and nonstrenuous activities are best. Contact activities such as football or soccer should be avoided in order to protect the abdomen, as should those which involve repeated jumping or bouncing. Pregnant women should also take extra measures to stay well hydrated and avoid overheating while exercising.

Which over-the-counter medications are safe to take during pregnancy?

Some over-the-counter (OTC) medications are safe to use during pregnancy, but a handful of common medications, including aspirin and ibuprofen, should be completely avoided. All medications should be used sparingly during the first 12 weeks (the first trimester), a particularly important period of fetal organ development.

OTC medications that are safe to use during pregnancy include:

The above is not a complete list. When in doubt, a woman should be in close contact with her OB-GYN to discuss taking OTC medications and supplements during pregnancy.

What changes will I have to make to my lifestyle during pregnancy?

Some women may need to adopt certain lifestyle changes in order to have the healthiest possible pregnancy and to avoid complications such as gestational diabetes, miscarriage and birth defects. The following adjustments should be made before a woman starts trying to get pregnant, and certainly after she is pregnant:

What are the normal “side effects” of pregnancy? 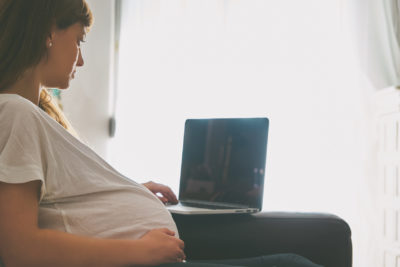 As the body undergoes significant changes to accommodate and support the developing fetus, certain pregnancy symptoms and side effects are to be expected. Some of the more common ones are listed below.

Morning sickness is nausea and vomiting that tends to occur in the first trimester of pregnancy. Despite its name, it may occur any time of the day, though many women experience the most severe symptoms upon waking. For most, morning sickness goes away after the first trimester, but for a small number of women it may last throughout the pregnancy.

Medical treatment for morning sickness is usually not needed, as it tends to resolve on its own as pregnancy progresses. Eating small meals throughout the day can help reduce nausea, and in some cases an OB-GYN may advise a patient to take certain anti-nausea medications for relief of symptoms. Natural remedies such as peppermint and ginger can also be helpful.

To ease constipation during pregnancy, women are encouraged to eat a fiber-rich diet, increase water intake and exercise regularly.

Mood swings and fatigue are very common aspects of pregnancy. They are attributed to hormonal and physical changes in the body. Changes in mood tend to be particularly severe early in the pregnancy and late in the third trimester as the body prepares for birth.

Some women experience depression during pregnancy, a condition known as antepartum depression. This can be very serious and debilitating. A woman experiencing persistent feelings of hopelessness, guilt, anxiety or lack of interest in things she normally enjoys should contact her doctor right away to discuss treatment options. Our PROMISE Perinatal Mood Disorder Clinic screens our patients from the 20th week of pregnancy and beyond birth for mood problems, offering treatment and support.

As hormone changes brought on by pregnancy cause the digestive system to slow, food stays in the stomach longer. This can lead to acid reflux, in which stomach acid bubbles into the esophagus and throat and causes a painful burning sensation. Additionally, the growing baby can put pressure on the stomach, worsening heartburn symptoms.

Sometime during the second trimester, the movement of the baby becomes detectable. This subtle movement is called “quickening.” As the baby develops, the movements will become more pronounced, because the baby is beginning to stretch, hiccup, kick and turn.

Throughout the third trimester, women will experience an irregular pattern of contractions. These are called Braxton Hicks contractions, and unlike labor contractions, they do not occur in a pattern or increase in severity. However, they are sometimes painful.

True labor contractions tend to last longer than Braxton Hicks contractions (up to a full minute) and will occur at a regular frequency with increasing severity.

For more detail about what symptoms to expect throughout each trimester of pregnancy, explore the topics below.

How can I plan for labor and delivery?

Developing a birth plan is an important part of pregnancy for most women. A birth plan addresses how the baby will be delivered (vaginally or via cesarean section), how to manage labor pain, desired birthing position, who will be present in the room during delivery, and other important details. Expecting mothers should plan on discussing their birthing plan preferences with their OB-GYN.

Further Reading: Why Give Birth at University of Colorado Hospital?