A vaginal ring, often called by the brand name NuvaRing, is a small, flexible ring that a woman inserts into her vagina to prevent pregnancy. The ring is placed in the vagina for three weeks and then removed for the fourth week. A new ring is used each month.

The ring prevents pregnancy by releasing hormones (estrogen and progestin – the same hormones used in birth control pills) that prevent a woman’s ovaries from releasing eggs (ovulation).  The hormones also thicken a woman’s cervical mucus, blocking sperm from joining the egg if one is released. In addition, the hormones thins the lining of the uterus, which prevents a fertilized egg from attaching in the uterus.

NuvaRing is available with a prescription from a drugstore or clinic, and costs between $50 to $80 a month. As with other birth control methods, NuvaRing does not protect against STDs (sexually-transmitted disease).

How to Use the NuvaRing

Starting use of the ring within the first five days after the start of a menstrual period is usually recommended. If the vaginal ring is inserted later than day five of a woman’s cycle, she should use back-up birth control (i.e. condoms) for the first seven days of use. The ring can interfere with the placement of certain birth control methods, such as the diaphragm, so these should not be used as backup methods with the NuvaRing.

How to insert the NuvaRing

If the NuvaRing slips out of the vagina, wash the ring with lukewarm water and put it back in as soon as possible. Be sure to use a backup birth control method if the vaginal ring has been out for more than three hours.

If the ring has been left in longer than four weeks, remove the ring and take a pregnancy test, since it is possible to become pregnant if you had sex after the fourth week. Place a new ring in and use a backup birth control method for the first seven days.

If you want to become pregnant, stop using the NuvaRing. Though it usually takes a month or two for your period to return to normal cycle, it is possible to get pregnant right after discontinuing use. 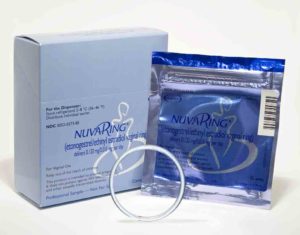 NuvaRing is very effective when used correctly (inserted for three weeks, removed for one week, and a new ring is inserted on the same day of the week that the previous one was inserted).

Certain medications make the vaginal ring less effective. These include:

Who should not use NuvaRing

Most women can use the NuvaRing safely. However, all medications carry some risk so it’s important to discuss birth control options with a doctor.

Women should not use NuvaRing if they:

Using a vaginal ring is simple and effective. There is no pill to take each day and nothing to remember right before intercourse.

Many women experience lighter and shorter periods with NuvaRing. Additionally, the NuvaRing offers similar benefits to the pill, including protection against:

Some women experience undesirable side effects with NuvaRing. This can include bleeding between periods, nausea, vomiting, or breast tenderness. These side effects usually go away after two to three months of using the NuvaRing.

Longer-lasting side effect may include vaginal discharge, infection or irritation. In some cases, the hormones in NuvaRing may change a woman’s sexual desire.