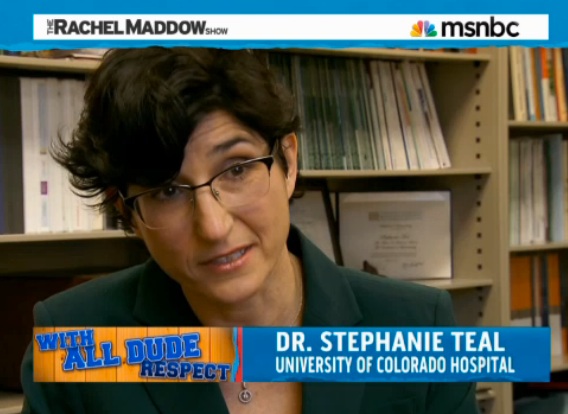 Dr. Stephanie Teal appeared on The Rachel Maddow Show on October 29, 2014, in a lengthy segment titled “An IUD Is Not an Ongoing Abortion in Your Body.”

Rachel Maddow introduced Dr. Teal as a leader in promoting effective contraception for young women and girls and in helping to dramatically reduce Colorado teen pregnancies. She explained that this success is due in part to efforts of Dr. Teal and others to get these young women to use the IUD (intrauterine device) or contraceptive implants.

Dr. Stephanie Teal: “Young women weren’t the original market for IUDs. But we are trying to turn the paradigm on its head. Instead of having to do something every single day to stay non-pregnant, let’s just do one thing and make non-pregnant the default state.

“Young women’s lives are very complex. And trying to take a pill at the same time every day—forget about it. That’s why we see that the failure rate of pills, patch and ring are actually twice as high in women under 21 as in women over 21. It’s not that the pharmacology is different and that the medicine doesn’t work in younger people. It’s that it’s complex to use.”

Maddow pointed out that some candidates for Colorado office say the IUD works by causing an abortion. Dr. Teal explained that is not the case and that the IUD merely stops the sperm from fertilizing the egg.

“I think the people that argue about it are politicians, and they thrive on difference,” Dr. Teal said. “There is not any argument about it in the medical community.”

Watch the video on MSNBC

Welcome to the Newsroom

Welcome to the Newsroom

Thank you for your interest in University of Colorado OB-GYN. The newsroom is a comprehensive online resource for the media. Here you’ll find the latest news coverage on CU OB-GYN, as well as fact sheets, patient stories and recent press releases. CU OB-GYN doctors are an expert team equipped to perform everything from routine well-woman exams to labor and delivery to the most complex gynecologic surgeries and procedures. Feel free to contact us for interviews or further assistance. Photos are available.