Everyone gains and loses weight differently during and after pregnancy, and it’s not a competition as to how quickly you can lose your postpartum weight.

In the obstetrics news media lately there has been a lot of focus on appropriate weight gain and pregnancy and how safe it is postpartum to lose weight after you’ve had your baby. There are definitely two ends of the spectrum to this story, but what has gotten a lot of press lately are women who lose their postpartum baby weight very quickly, and within a month of their birth post pictures of themselves on Facebook bragging about how great they look.

I think it’s important to look at this topic from a more global perspective and remember that in the United States most of our problem is with excessive weight gain both during and not during pregnancy. Our difficulty is with losing weight, and about 60 percent of American women of child-bearing age are overweight or obese.

American women will gain somewhere between 30 and 40 pounds during each pregnancy. And on average, American women hold onto about five to 10 pounds per baby that they have. So at the end of the day the average American woman will weigh about 20 to 30 pounds more than she did before going into her first pregnancy.

Too much weight loss isn’t the problem

It’s important to look at that whole picture when you’re thinking about weight gain and pregnancy before judging someone for putting a picture on Facebook for losing weight too fast. I think it’s reasonably safe to start exercising when you and your physician feel that it’s a safe time to start exercising after you’ve had your baby.

If you had an uncomplicated vaginal delivery, that can be as soon as two to four weeks postpartum. And if you had a C-section, remember it’s a major abdominal surgery, so you may need to wait a whole six weeks postpartum before you’re exercising again.

Also, it takes you nine months to put the weight on that you gained in the entire pregnancy, so it may be unreasonable to think that it may all melt away within two or three weeks of your pregnancy. Keep in mind that the goal is to get down to your pre-pregnancy weight within a year of your birth, and preferably before you get pregnant again with your next baby so you don’t carry an extra five to 10 pounds per baby that you have.

Probably the most important thing to remember about this is that everyone gains their weight and loses their weight differently in pregnancy, and that it’s not a competition as to how quickly you can lose your postpartum weight. 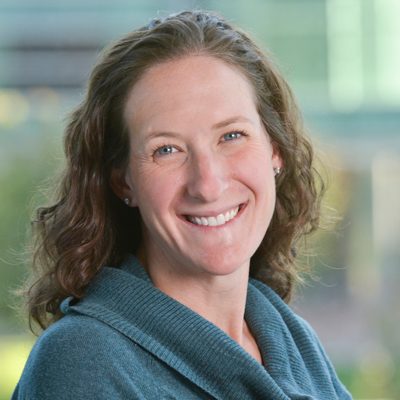 Dr. Arruda serves in the Gynecologic Oncology division at CU, specializing in minimally invasive and complex pelvic surgeries. She provides a full range of gynecologic services including annual exams, colposcopy and endometrial ablation.